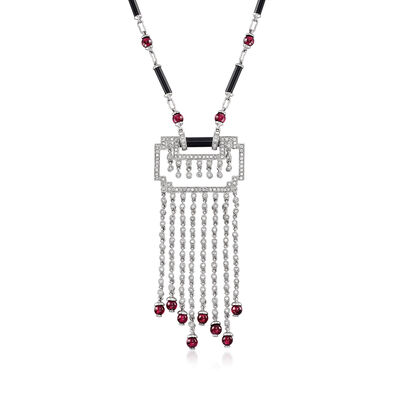 Behold the elegant allure of a garnet pendant and the versatile vibe of a garnet necklace! Both are here at Ross-Simons, where our savvy merchants and trend-spotting designers bring you beautiful bargains in fine garnet jewelry every day.

A classy garnet necklace works by day with your work wardrobe and by night with your little black dress. The burgundy glow of a garnet solitaire in a garnet and diamond pendant—makes a white business blouse so much more interesting. For evening looks, a small or sizeable garnet pendant adds a sultry sizzle.

Garnet beads create a lovely cherry-red garnet necklace. A delectable accessory, your beaded garnet necklace will dress up a casual outfit or add a fashionable pop of color to a neutral dress or suit.

For a sophisticated yet playful garnet necklace, try garnet beads on a sterling silver chain, or twisted around ropes of freshwater pearls. When you want to feel like a princess, wear a garnet diamond pendant set in 14kt white or yellow gold.

For a January birthday gift, a 2nd wedding anniversary, or just because it's beautiful—select a gold garnet pendant, a silver garnet necklace—or one of each!